The Unknown Sources setting isn't the mystery — or the demon — it's made out to be. 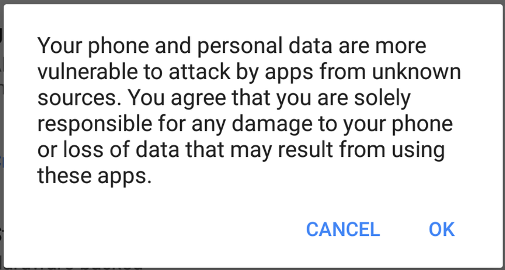 To install apps that you downloaded from somewhere besides the "official" app store from Google or the company that made your phone, you need to enable the "allow unknown sources" setting.

What are 'Unknown Sources'?

No, not people who leak government stuff to the press. The Android kind of unknown sources. It's a scary label for a simple thing: a source for apps you want to install that is not trusted.

Unknown = not vetted directly by Google.

Why is there even a setting for this?

Google doesn't claim that apps from other places are a bad thing. It has a whole page that tells app developers how to go about offering apps without putting them in the Play Store. All Google has to say about the Unknown Sources setting is:

Android protects users from inadvertent download and install of apps from locations other than Google Play (which is trusted). It blocks such installs until the user opts in to Unknown sources in Settings > Security on their device. Users need to make this configuration change before they download your apps to their devices.

Google is cool with developers doing it and cool with you downloading and installing them. But they make sure you opt-in for it before you do.

Are unknown sources a bad thing?

Google wants to scan every single app you install right before you install it. It will ask you to let it do so and to let it do it in the future the first time you try. At Google I/O, we were told that Google scans 50 billion apps per day to ferret out any with malware, including the ones you are installing. And this doesn't depend on having the latest version of Android. Every single phone with access to Google Play running Android 4 or higher has these protections built in through Google's Play Services feature. While no type of scanning is going to be 100% foolproof, chances are someone else has installed that app before you and Google has looked at it, and they will look harder if it does anything fishy. Or has a hidden ability to do anything fishy.

That's a question with a big, convoluted answer that no two people will agree on. Let's just say that Google places some restrictions on ways developers can make money. Not everyone is willing to accept those restrictions.

There are a lot of different ways to define trust, but we think our transparency and word of mouth is one of the best ones. Your family, friends, neighbors, co-workers, people in forums and comments can tell you whether or not you should trust our app, because we built it with YOU in mind!